Tonight Alison and I chose to watch the news from the North East as we were interested in the weather (we both still have a parent living there). It was interesting to see our home town, fleetingly, and to begin to understand how the weather is affecting them.

However, it was a later article that caught my attention and imagination. Apparently Middlesbrough football club have changed their Good Friday fixture to the time of 3.00 pm. Some Church-goers have lodged objections as this is the time when the Church particularly remembers the death of Jesus Christ and so for many Christians it is a particularly important time.

The article centred on one particular Priest who is also a Middlesbrough supporter and the dilemma he faced. His solution ? Move the service to 2.30 p.m. and he could probably get to the ground for the second half.

Question ? is this a watering down of the Gospel or an attempt to recognise that religious views cannot dictate what happens amongst people who don`t have a faith.

To be honest I don`t really have an answer. I see that what has caused trouble in the past is the Church insisting that the whole of society toe the Church line irrespective of belief or unbelief. One example being the issue of Sunday shopping; although I`m not entirely comfortable with the concept of shopping on a Sunday why should my uncomfortability be foisted onto others for whom Christianity has no relevance. I certainly don`t want to return to the days when no-one could do anything on a Sunday except sit around the house in `wholesome` pursuits. In the long run it’s probably caused more damage than anything, giving the sense that the Church desires to spoil enjoyment. On the other hand should a Priest of the cloth really forego his Worship timings in favour of his football enjoyment? (on any other day I could have understood it more, but on the day of the commemoration of the crucifixion?) Is he denying his own flock the opportunity of Worship at the moment which means most to them?

I refuse to pronounce judgement on him, his flock or on society but it is a stark reminder to all of us that firstly, we have no insist that our way is the only way and secondly, to stop and ask of ourselves what are our priorities.

For Christians that question must include the related question, “is there anything that comes before Jesus?”

In an earlier blog entry on 20th August 2011, I pointed out how many football supporters would follow their team through thick and thin but many Church-goers want Church to be that which suits them. I suggest that this is because there is a difference between Church-goers and Christians. The former see the Church as a club for their enjoyment whereas the latter follow Jesus and Church attendance is a part of that following.

Again, I say it is about priorities and again I want to suggest that our number one priority should be Jesus; over football, over gardening, over the W.I. or the Rotary Club all of which are good and enjoyable BUT not at the expense of being a disciple of Jesus.

Happy New Year to everyone.

Hope you are all well and looking forward to 2015. What will it bring ? Already for the Redshaws it’s brought a mixture of relief, from potentially worrying news, and disappointment over a longed for project which may not now happen and the need to pray again for Gids direction.

It’s brought a wonderful new colleague in my new Circuit Administrator and if she’s half as good as my two previous ones she’ll be great (no pressure, Caroline!); however, later this year we’ll say goodbye to another colleague in Gordon and hello to a new one in Sue. 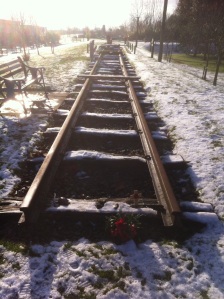 It all reminds me that as we step out into this New Year we set ourselves on a track but to where ? In November Alison and I went to London by train; Burton only has two lines, North and South but our first change was at Tamworth with four lines as East and West are included; upon our arrival at Kings Cross we could see an array of lines including some destined for overseas and others underground. I’ve always found train lines fascinating as I can often imagine the stopping off points and ultimately the destination that the line will lead to.

However, what if we’re on the wrong line ? As a child visiting family in London we had to get the train from Central London to Croydon, but after it moved off my cousin realised we were actually on a train to Brighton. She didn’t panic but realised if we got off at such and such a station we could get back to where we needed to be. As she was familiar with the destination she could work out how to get there even after a mistake.

Our journey this year needs to include Jesus, because left to our own devices we will make wrong decisions, we’ll let anxiety overtake us, we might even decide to turn back. We look at the track stretched out before us and wonder about the destination- is it worth it ? Will it take too long ? What will the cost be ? And many other questions. 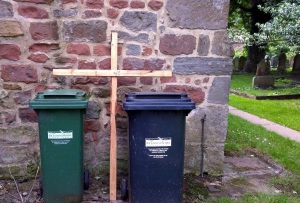 This is why we need Jesus. He knows the destination because He is divine, but He also knows (because He is human) that the route will take us through temptation, despair, worry, joy, hope and each one can be a distraction to us if we let it. I love the above picture for it reminds me so much that Jesus died on the cross between two people who had lost their way (one of whom re-found the way on his own cross) and Jesus died for all of us to help us find our way to the destination of Heaven.

“I am the Way, the Truth and the Life, no-one can come to the Father except by me” said Jesus

I step out into 2015, with all its hopes and disappointments trusting entirely in my Lord and Saviour, Jesus.