The words of Jesus continue to resound down through the ages, “For God so loved the world that he gave his only begotten son, so that whoever believes in him may not perish but have life everlasting”; much quoted by Christians everywhere, sadly sometimes to bible-bash their sincerely held but insensitive views. 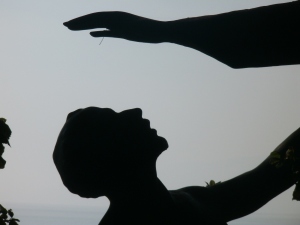 What does it really mean for us in our day-to-day lives. When I was a young, enthusiastic Minister it seemed to me that my only purpose in life was to build up the Church; i.e. get more and more people in for the services. `bums on pews` mentality. I was successful if I could only fill up the Church with more and more people either on a Sunday or in a mid-week praise service. Consequently, there were highs and lows throughout those early years allied with frustration, disappointment and anger that other people couldn`t see it my way.

Now, however, I`ve come to a point of realising that it’s not the Church that matters but trying to bless people, communities and trying to introduce them to my friend Jesus in a culturally sensitive way. Whilst at one time I had no qualms about dangling them over the pit of Hell, now I realise that heaven is so much more attractive because it speaks of an eternal relationship with Jesus. I also realise that many are already on that journey and they simply need someone alongside them to help them on their way.

I think of someone I knew many years ago. C used to let his wife and children attend my church and he would often pop in for coffee afterwards when coming to collect them. In conversation with C I discovered that he knew his scriptures well and could argue the case for accuracy of scripture better than I could. One day I visited him and as no one else was there we began to get down to the heart of the matter and he said something along these lines, “I don`t have a problem with Jesus, in fact I quite like him, but I can`t stand his Church”

C`s issue was more with the structure of Church than with the love of Jesus; the politics of the tea-towel rota blocked his view of Jesus; the deeply held views re. the liturgy which scared him and the sense of one-style-fits-all mentality of the Church. Now, I think C was hiding behind all these excuses to a certain extent but the fact remains that the credibility issue of Jesus is more the Church. The trouble is “the church” is you and I, and so we must ask ourselves whether or not we`re getting in the road of other people coming to know Jesus by demanding they fit into our style of worship, our style of churchmanship and our perceived way of doing things as the only way.

Jesus ordained Peter by declaring “upon this rock I will build my Church”. The Church of Jesus is surely contained in his people rather than in the bricks and stones of temples or churches or cathedrals, and his people ought to be reflections of his love for others.

This week can you or I truly be such a reflection ?