Well, almost over. Tomorrow is the last day.

After all the excitement, pain and what have you of yesterday today seemed a bit  of an anti-climax. It got off to a good start though with the Fresh Ways Working Group report, which is the product of JAMWPEEC (the joint Anglican/Methodist working party on emerging expressions of Church). Te report is contained in the attached photograph. 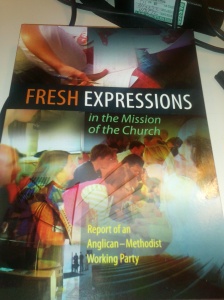 We learnt that amongst the latest statistics for the Methodist Church there were 1828 fresh expressions in Methodism last year covering 82% of Methodist Circuits.. 552 met weekly, 306 fortnightly and 720 monthly ( I know that doesn`t add up !). 34,374 people attended these expressions and 3460 were involved in leadership. These are tremendously encouraging statistics.

The report continues to support the notion of the “mixed economy” i.e. the inherited Church having as much value as fresh expressions of church. Questions are asked about training of leaders and it was pointed out that the health check list on page 192 should apply to all Churches not just fresh expressions. At some point I may come back and blog about these aspirations.

This afternoon began with a Bible reflection by a Minister from Tonga on Psalm 103.

The MRDF (Methodist Relief and Development Fund) followed by reporting on the work they were doing amongst African women helping them to grow peanuts and thereby becoming self-sufficient. This in turn helped families to be fed and educated. 110,000 people have been helped through this and other MRDF programmes. Wonderful quote today “No-one can make a greater mistake than he who does nothing” So true.

And then the difficulties came…………………….. We moved into a review of the Senior Leadership of the Connexional Team from whom there was a proposal to take away a couple of Connexional posts as part of the cost cutting exercises Conference has asked for in recent years. Well, we got into a wonderful muddle with Notices of Motion, emergency Notices of Motion, resolutions, points of order, getting the wording right and so on. Whilst no-one fell out with anyone it was very time-consuming and laborious, and yet it had to be done because we were debating peoples jobs and lives; it had to be right.

Didn`t half make me thankful that the worst I have to chair is the Circuit Meeting !

The result of the debate was that Connexional posts are to go, so prayers were held for those staff who were losing their jobs and for those whose workload would increase. A second day of pain and tears.

Other items that were discussed today included a new Notice of Motion requesting that the Government do more to seek and end to Israeli attacks on Palestinian settlements, and another sought reconciliation between the Fijian Methodist Church and the government of Fiji. This shows the wide and diverse range of issues covered at Conference.

We are now running badly behind time and the chances of us getting away on time tomorrow are slim. Already we have been told we`ll be working through coffee break. Should be interesting !!!!!!