I’ve taken part in an amazing event this weekend. The annual Relay for Life event held at Swanwick helps to raise awareness and funds for cancer research UK. Although I supported it last year this was the first time I was able to take part and be on the team (TEAM HOPE). 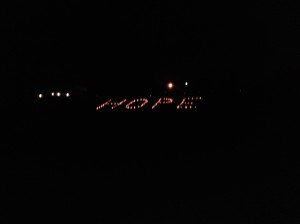 The day was packed with themed walks (to my eternal shame I enjoyed the Village People theme !), fun, laughter, dog walking and good companionship across the community. Although I knew the folk from the Chapel this was an opportunity to be involved in the Swanwick community as people from all walks of life were united in the venture. The common uniting feature was that everyone knew someone with or had been touched by cancer. I found myself remembering my Mum who survived cancer and also remembering others who are facing cancer treatment at this time.

As we were part of a team it meant that you didn’t have to be walking for the full 24 hours, but there was always at least one team member walking around the circuit at any given time. Having said that I totalled the day up and managed just over 5 miles ! Sasha the dog walked for two of them and then slept right through till Sunday ! Five miles were nothing compared to those team members who walked much further and to those who even stayed and walked through the night. All credit to them.

I don`t know what the final figure was that was raised but team hope had made over £1000 by the time I left, and then there were the other teams.

The day began with a survivors lap; those folk who had suffered cancer and had survived. What an inspiring sight that was, as they walked in their pink t-shirts and led the way being cheered and clapped along. After that we all joined in and began our own team laps.

At the close of the Saturday we had a short moving ceremony, listening to music whilst all lights on the site were extinguished. A poem was read and we watched chinese lanterns being lit and let loose into the air. Then at the close of the ceremony the word HOPE was spelt out on the hillside in candles. See the picture above. I`m told that during the night the wording would be changed, as new candles were added and others removed, into the word CURE. What a marvellous hope in itself and what we felt we were striving towards.

After the ceremony we were invited to complete a lap in the dark and as we did so we passed bags lining the side of the track. Each bag had been decorated in memory of someone who had suffered cancer and survived or had not survived and as I walked you saw people kneeling or sitting quietly beside their bag; obviously remembering someone. I really wish I had understood that this would be happening and so I would have decorated a bag for those I know facing surgery next week. 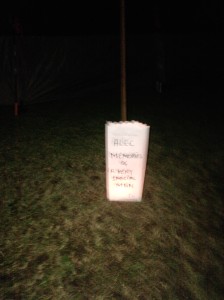 This is one of the lit bags. I don’t know if you can read the writing on it but it speaks of someone and that is what we remembered all day long, the fact that this fun enjoyable event was in memory of those who had passed away, in support of those who had survived and to raise money in the fight against cancer.

This is a day I’ll remember for a very long time.